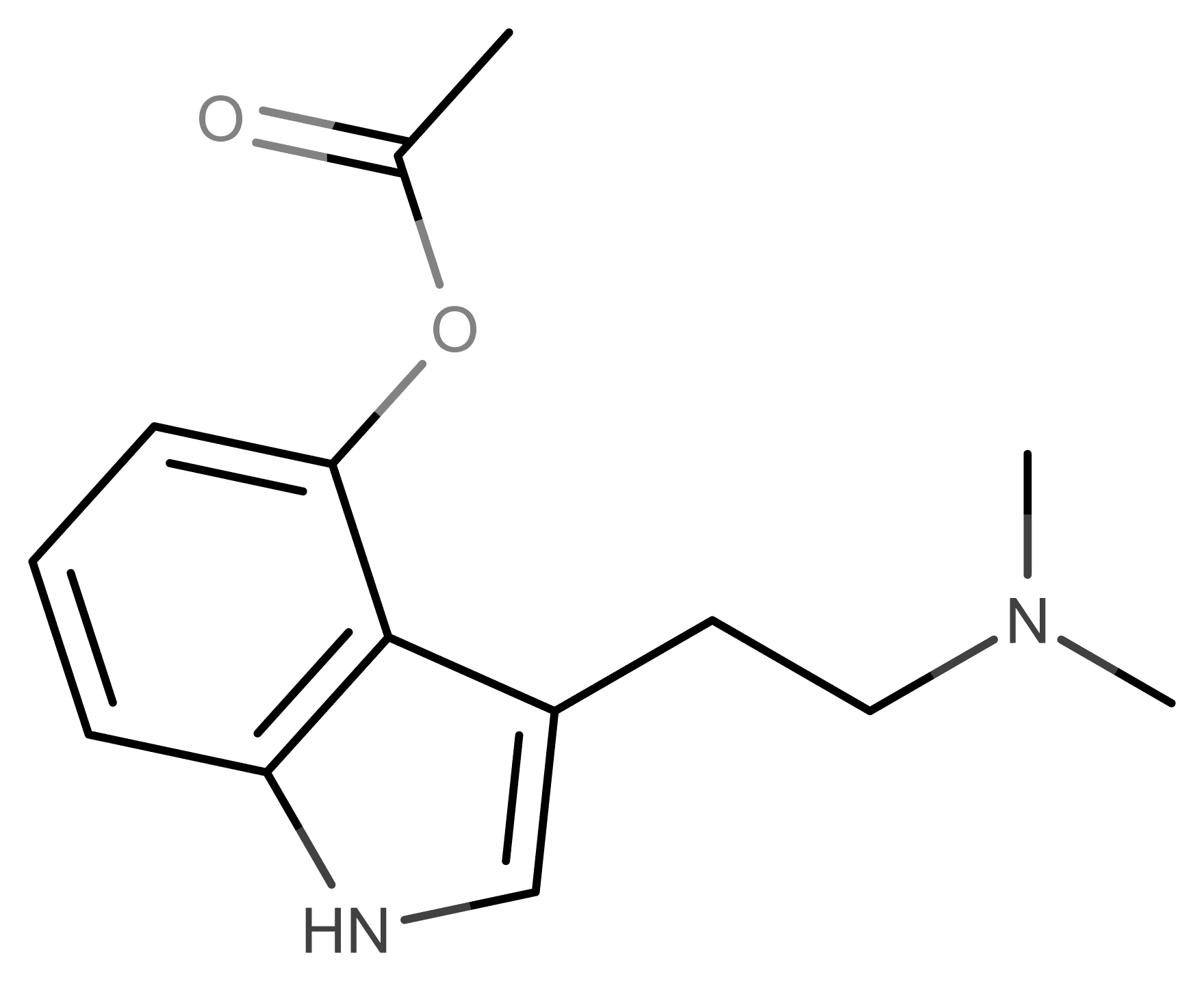 A prodrug for Psilocin with extremely similar effects as Mushrooms.

Non-Addictive With Low Potential For Abuse

This dosage information is gathered from users and resources for educational purposes only. It is not a recommendation and should be verified with other sources for accuracy.

4-ACO-DMT: 4-acetoxy-n,n-dimethyltryptamine (also known as 4-aco-dmt, 4-acetoxy-dmt, o-acetylpsilocin, and psilacetin) is a novel psychedelic substance of the tryptamine class. 4-aco-dmt is chemically similar to psilocybin, the active ingredient in psilocybin mushrooms (magic mushrooms). it belongs to a group known as the substituted tryptamines which act by stimulating serotonin receptors in the brain. O-Acetylpsilocin is a semi-synthetic psychoactive drug that has been suggested by David Nichols to be a potentially useful alternative to psilocybin for pharmacological studies, as they are both believed to be prodrugs of psilocin. However, some users report that O-acetylpsilocin’s subjective effects differ from those of psilocybin and psilocin. Some users prefer it over natural psilocybin mushrooms due to feeling less of adverse side effects such as nausea, and heavy body load, which the natural mushroom sometimes tend to produce. It is the acetylated form of the psilocybin mushroom alkaloid psilocin and is a lower homolog of 4-AcO-MET, 4-AcO-DET, 4-AcO-MiPT and 4-AcO-DiPT.

4-AcO-DMT (4-Acetoxy-N,N-dimethyltryptamine) is a semisynthetic tryptamine psychedelic that acts as a prodrug of psilocin, one of the main psychoactive compounds found in magic mushrooms. Since the compound metabolizes into psilocin in the body, similar to psilocybin, its effects closely resemble those of magic mushrooms. The Swiss chemist Albert Hofmann, as well as Franz Troxler at Sandoz Laboratories in Switzerland, first synthesized 4-AcO-DMT in 1963 . Its recreational use peaked in the 2010s following its arrival to the online research chemical market.

4-AcO-DMT is a semisynthetic substance, meaning it is produced by synthesis with naturally occurring precursors. Other names for 4-AcO-DMT include psilacetin, 4-Acetoxy-DMT, and O-Acetylpsilocin.

4-AcO-DMT is encountered as an off-white or brown crystalline powder, either as its fumarate or hydrochloride salt. By far, the most common method of ingestion is oral, either by mixing the powder in solution or by taking tablets, capsules, or gel tabs. It can also be taken intranasally by insufflation, which produces a slightly shorter trip that comes on more rapidly.

The most common method of production is through acetylation of psilocin under alkaline or acidic conditions. Acetylation is a reaction that adds an acetyl functional group to a chemical compound. It produces effects similar or even identical to psilocybin’s, since they are both prodrugs of psilocin.

However, some users speculate that 4-AcO-DMT may produce its own psychoactive effects as well. Indeed, users that have injected or smoked it report near-immediate psychoactive effects. Both of these routes of administration bypass first-pass metabolism by the liver

A common dose range for 4-AcO-DMT is 8–20 mg when orally ingested or insufflated. When insufflated, the effects come on more rapidly and don’t last as long. No matter the route of administration, aftereffects may be apparent for 12–14 hours following ingestion.

The cognitive effects of 4-AcO-DMT are nearly identical to those of psilocybin mushrooms due to the way both compounds act as a prodrug of psilocin. With that said, many users report the 4-AcO-DMT trip has a warmer or more euphoric quality compared to psilocybin-containing mushrooms. These effects will vary based on dosage, the individual, and set and setting, but can include:

Reported benefits of consuming 4-AcO-DMT are similar to those of most other psychedelics, particularly psilocybin mushrooms. 4-AcO-DMT may hold therapeutic potential for the treatment of depression, PTSD, anxiety, OCD, and addiction. Microdosing 4-AcO-DMT (1–2.5 mg regimented doses) may enhance sociability, improve mood, and increase creativity and focus.

One user reports that several 4-AcO-DMT trips and subsequent integration provided profound relief to his depression and OCD symptoms. His trips allowed him to process and heal childhood trauma, examine self-limiting beliefs, accept himself fully, and vent deeply repressed emotions.

Another user reports 4-AcO-DMT helped with quitting cigarettes, and understanding the beneficial aspects of alone time after consistently being in long-term relationships.

With a 20 mg oral dose, one user reports a healing experience that allowed him to further accept and appreciate his own individuality. He also realized that he had too many possessions and was too involved with negative news. This led him to live a happier, more fulfilling life after the trip.

After an extremely high dose, one user also reports he felt the heavy trip helped him overcome a wide range of substance addictions.

Common Risks or Side Effects

With the limited history of use and research available on 4-AcO-DMT, a comprehensive set of risks cannot be determined at this time. Being a relatively recent research chemical, the long-term safety and toxicity of 4-AcO-DMT haven’t been studied in a clinical context.

Due to its chemical similarity to psilocybin and psilocin, however, it’s assumed to have a similar safety profile. Like psilocybin, 4-AcO-DMT is considered to be non-addictive and with low abuse potential. High doses (above 25 mg) have not been linked to fatalities. However, these doses have caused severe adverse effects such as blackouts, seizures, hypertension, and vomiting.

Taking 4-AcO-DMT with lithium, tramadol, and stimulants such as amphetamines and cocaine may increase the chance of seizures or psychosis, so these combinations are strongly discouraged. In addition, 4-AcO-DMT’s effects may be strongly potentiated by MAOIs (monoamine oxidase inhibitors), MDMA, and cannabis. These combinations may increase the chance of negative psychological symptoms such as paranoia, panic attacks, anxiety, and psychosis.

The largest risk of taking any psychedelics includes the potential to develop HPPD, PTSD, or psychosis. HPPD, or hallucinogen persisting perception disorder, involves a user experiencing hallucinations well after a trip has ended. These hallucinations vary from minor to severe. Some individuals suffering from this disorder experience light visual snow while others experience full-blown hallucinations. A particularly difficult or negative trip can cause HPPD or PTSD. Psychosis particularly affects individuals with a history of schizophrenia or psychotic breaks. Most users never experience any of these disorders, but they can occur.

There are no reviews yet.

Be the first to review “4-ACO-DMT” Cancel reply

Join our newsletter and get 20% discount